Tettye is the most picturesque district of Pécs, with narrow streets winding up the southern foot of the Mecsek hill, charming houses, and a large park in a splendid location that makes it a favourite outing destination for locals. Announced in the summer of 2007, the design competition was won by s73 Studio. The competition design offered solutions that would facilitate, even after the town’s tenure as European Capital of Culture, Tettye to rejuvenate its green space system, and undergo a sociological and physical rehabilitation—all this in a manner that was to offer a modern, progressive model for the organization of open space, a trendsetting vision for the economic and political influencers of urban development.

The first phase of the project meant the restoration of Tettye Park, while the second phase concerned the restoration of the ruin of the Szathmáry Palace in the heart of the park, and of the ruins of the monastery on Ágoston Square, traffic calming in Vince Street, and making the Tettye Stream visible on the surface. Furthermore, a pedestrian panorama walk was built along Havihegyi Road. 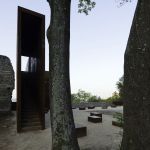 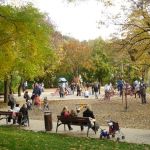