The design of the green spaces of the Kőbánya facility of the pharmaceutical company has been in progress for nine years. Thanks to the openness of the client, the open-space architecture of the nearly four-hectare green space could be designed in multiple phases. The industrial character runs through the units of green space like a subtle leitmotif.
The fine, distinct plays of topology, the lineation and the plants used all reflect the technological processes inside the plant, the accurate procedures of the pharmaceutical industry. The reception area on Gyömrői Road, the emblematic mounds with the logos, the water structures, the understated, unmistakable use of plants in the inner areas, and the winding footpaths are all simplified, symbolic representations of the production processes. The result is a modern, harmonic complex of industrial gardens that offer refreshment for both the body and the eyes. 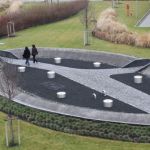 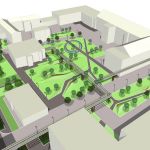