The starting point for the design was the transition from old to new. On the city side, to the north, the existing buildings are dominant, the shape of the atrium roof adapts to the shape of the existing warehouses. From there the atrium roof transforms gradually with a rising curvature towards the new compact building volume, which leans boldly towards the public square.
Three of the six warehouses are now remaining, and the brief requests to keep at least 60 per cent of the volume intact, while rightfully demanding to take away the first 20m of the two warehouses closest to the city, to create a small square to improve the connection with the urban context south of the Central Market Hall. The first two warehouse buildings will be carefully renovated while adjusting the vertical size of the windows so as to open up what were hermetic buildings towards the Danube, to the interior gallery, and to reach out to the adjoining district.
The design team has chosen the language of Non-Standard Architecture to express the ambition to be a landmark for our era. Non-Standard Architecture is based on the modern production process of mass-customization where there is no longer a need for the repetition of elements which are exactly the same. In the Whale, every piece of steel and glass is unique in size and shape, and yet this is economically viable thanks to the advanced computer-driven file-to-factory production process. The advantages of a truly Non-Standard Architecture are huge. It creates a new freedom of expression for the architect and the richness of its expression, combined with the evident logic of mass-customization, has proved appealing to a large public. 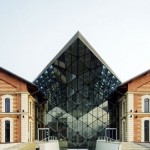 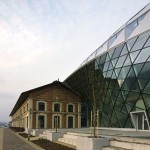 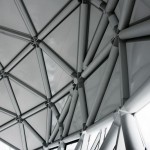