Fitting in the environment

This exceptionally valuable plot lies on the eastern slope of Svábhegy, covered in part by the remains of a park built at the turn of the century—practically a forest with trees of great value. The crescent of the building occupies the less sloping upper portion of the plot, following its steep edge. The geometry of the crescent is determined by the contour lines, as the intention was to situate the building so that it would appear as a small cosmetic intervention on the slope. The distance between the building and the hunting lodge allows the architecture of the latter to assert itself, retain its character, while as an emphatic closure to the arc of the main structure, it creates a unified composition with the former. The glass-walled corridor that overlooks the valley acts as the main street for the traffic within the school, and offers a great view.

The large glass surfaces were justified by the proximity of nature and the building’s educational function. While they ensure a visual connection with the environment, the enjoyment of an incomparable view, their transparency is also significant as a symbol of openness, broad-mindedness and democracy.

Use of natural materials

Inspired by the environment, we sought to use natural materials, above all wood, as much as possible. Wood, rather than aluminium, was used for the supporting structure of the glass walls, as well as for the facade cladding, the ceiling, the floor of the classrooms, and the visible beams of the lobby. Under the same principle, the retaining walls are made of natural rocks, and the passageways are covered with stone floor tiles. 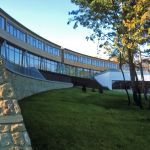 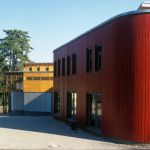 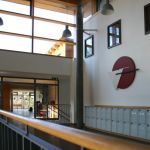 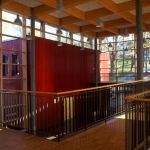