Renovation and extension of the Dubniczay Palace, László Károly Collection

Built as the home of canon István Dubniczay in 1751, one of the city’s most beautiful example of Baroque architecture stands in the centre of the Veszprém castle, across the bishop’s palace. The plot has an east-west orientation, and reaches from the street to the castle wall. The main wing and the adjoining outhouses and service buildings surround the intimate courtyard in a U-shape.
The building is a key element of the townscape for a number of reasons. Its main facade overlooks the square that houses the bishop’s (now archbishop’s) palace, the provost’s palace, and the Column of the Holy Trinity. Its current state bears witness to several construction periods. The ornamental murals uncovered in seven upstairs rooms and the rooms left of the gateway are of particular significance.
The reconstruction retains the last one of the various floor plans, the U-shape of the late 20th century. The addition of a storey to the northern wing makes the limiting walls of the courtyard symmetrical, and holds together the ground-floor rooms, which are from different periods. On the south, an annex was pulled down, and a new structure was built, with the original building height, and the eaves height of the granary. The original form of the mansard trusses of the roof of the main building, which burned down in 1905, could be reconstructed, and was used for a new roof, which is based on a Baroque model and includes a loft. The restored building continues to give home to the Brick Museum, and now also houses the municipality’s László Károly Collection. 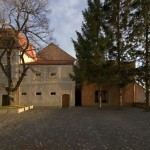 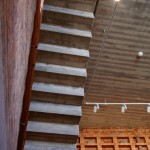 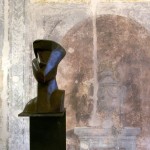