In the first phase of the open space development of Etele Square (up to the completion of the M4 underground line in the spring of 2014), the task was to design a provisional contemporary square that defines the forecourt of the underground station, serves heavy foot traffic, and does so with an attractive space structure and greenery. The square is based on a unified grid structure, with segments alternatively paved or planted. Segments with ornamental grass go a long way towards relaxing the geometric shape.
In the second phase of development, the whole of Etele Square is transformed. Over and above answering the needs of traffic, the square is to be a refined urban space that serves rest, recreation and contemplation. The generous amount of green space makes the square liveable, despite the substantial foot traffic and the large paved areas. The conceptual element that unites the area is the mound, which recedes along the line of flow between the terminal building and the housing projects, leaving some space for a small urban agora. Planted with ornamental grass, the thematic gardens that continue the grid of the pavement provide opportunities to withdraw from the urban bustle, a chance to rest on the benches amidst fresh greenery. 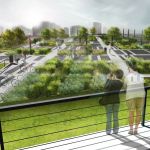 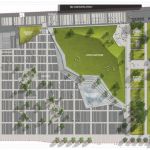