Budapest, 2004
The centre of gravity in this bay-like square, which is open towards the Danube, is closer to the massive structure of Hotel Gellért, coincides with the centre of the area outside the hotel, the axis of the entrance. To mark it, I designed a vertical motif, a domed structure, the Forrásház (Spring House), which both refers to the hall of the old Sáros Bath, which was pulled down, and is akin to the Art Nouveau domes of Hotel Gellért.
The Spring House is a celebration of Budapest, the city of baths. In its centre, Sándor Dobány’s fountain of Zsolnay ceramic is a form in the process of growing, a symbol of energy erupting from the ground. The spring is protected by the dome, a symbol of the universe, which is supported by eight pillars. The water of the spring leaves the dome through eight channels, which end in whirling basins in a reference to the eight baths of the capital. The eight pillars are also eight thrones, which face the points of the compass, and rest on a foundation that imitates waves. The internal surfaces of the pillars bear signs. Those facing the cardinal points are marked with cosmic signs, the others, pointing towards the ordinal directions, carry earthly signs, coats of arms. The eight pillars are the eight branches of the tree of life that reaches the heavens, while the ninth points in that direction: it is the oculus in the centre of the dome. With this opening, the dome seeks to connect with infinity. This infinity is the subject of Sándor Weöres’s poem, Ének a határtalanról (Song of the Boundless), which is carved into the tambour of the dome.

When I was still nobody,
light, pure light,
I often found rest
in the winding stream.
Until I almost became somebody,
a stone, rough stone,
rolled down, icy-veined,
by mighty forces on hillsides.
And I finally I dawned to life,
a flame, a naked flame,
and wide across the boundless void,
I reveal our real home. 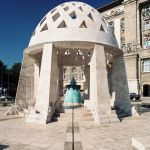 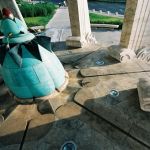 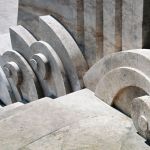 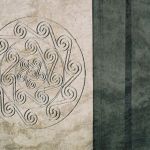