A simple hall church in the side of a hillock of sacral origin. A place of history, near the field where the Battle of Győr was fought against the troops of Napoleon. The area used to be the centre of an estate of the Benedictines, of which only the Baroque chapel on top of the hillock, and the graveyard around it, have remained. The new church stands among the homes that are wedged into the graveyard, but a step further back than these, to indicate the primary connections of the building, and to provide sufficient space for the transition between the profane and the sacral interior. Approached from this direction, the frontispiece, which spans the entire width of the front, beckons with the memory of the narthexes of hall churches, and prepares the visitor for the entrance, the celebration of the rite. It also encourages the caller to stay, with the arcade offering protection from the sun and the rain. In the mood of moderation, its height matches that of the graveyard chapel’s gable end; this voluntary restriction is to keep the standing of the Baroque monument intact. When stepping in from the arcade, the light-filled interior of the hall can be taken in instantly. Thanks to its proportions, orientation, and understated surfaces that still convey precise meanings, the effect is nevertheless complex. The limited amount of instruments – materials and structures – define the unity and emotional character of the building. The exterior of the thick, solid brick walls has a white plaster finish as it seeks to engage in a dialogue with the built environment, while the interior is unfinished, revealing its own natural beauty. Rather than associations to the history of brick architecture, the choice was prompted by a recognition of the natural and durable qualities of the material. Thanks to the variety of the bricks, the large, unsegmented faces of the walls have a distinctive, ornamental texture, which represents the relationship of the part and the whole, while the larch trusses and the ceramic ceiling make for archaic reminiscences. 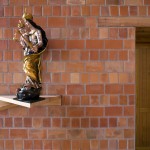 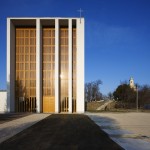 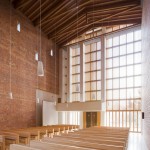