THE REVITALIZATION OF THE CENTRE OF KOMÁROM – SZABADSÁG SQUARE

The public buildings at what is now the centre of Komárom were built between 1926–1929, in Baroque Revival and neoclassical styles. The square they enclose was refashioned so as to revitalize the nearly one-hectare main square of the town in a manner that befits its historical architecture, and answers the needs of its contemporary users.
The central space is there to emphasize the connections between the two valuable buildings, the town hall and the school, and to give prominence to their facades. The remodelling of the central space also increases the prestige of the Heroes’ Memorial. The new functions of the building on Arany János Street allowed the planners to extend the square up to the building. The Roman sarcophagi also found a proper, appropriate placement.
While the important protected plants were kept, the rest of the vegetation was replaced in its entirety. Thanks to the openings, the square is now suggestive of the transparent structure that existed after the turn of the century. The fountain and the fresh air of the mist garden also contribute to an impression of elegance.

In 2012 the completed project received an Award of Excellence for Public Space Revitalization. 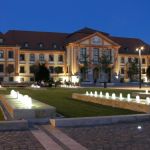 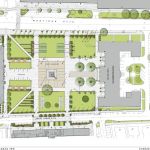