Built around the turn of the century, this villa has gone through a number of renovations, extensions and additions. Its original floor plan and facade have completely transformed. Its appearance, both externally and on the inside, was essentially defined by the post-war reconstructions, a period when it functioned as a sanatorium and then as a hostel of the Ministry of Interior.
Our task was to create reception spaces on the ground floor, and a home on the first. We strove for a high-quality residence with a dual function, and involved applied artists in the work. The walls of the meeting room are decorated with Anna Kubinyi’s silver-natural woollen mantle, and Zsuzsi Szabó’s panel curtains. By referencing Art Deco, which is part of the architectural character of the house, certain motifs evoke the period of construction. The warm atmosphere of colours is best matched by copper, which Éva Magyar used for her designs of radiator casings, handles, lamps and door handles.

Entitled Rhythm, the 60-square metre mural employed an original technique, with paint made from various Hungarian earths.
The cadence or base rhythm of the horse’s gaits is identical with that of the ritual dances of indigenous peoples. I chose the horse’s gaits because they convey a musical quality. The horses’ legs transform into the stems of musical notes (through computer manipulation), the wall becomes a music that represents the rhythms of the walk, the trot, and the gallop. Static and rhythmic changes of amplitude are responsible for the synchronicity of the image and the mental planes. I sought to create visual music that shows the collective equus of the soul. 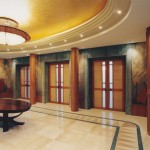 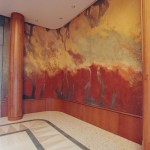 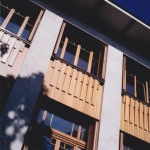