The short history of the building began in 2000 with an architectural design competition. The winners of the competition prepared the plans for permissions, proposals and construction.

The original concept was somewhat transformed during the design phase, and eventually we devised three lecture halls of different dimensions, a lobby, classrooms on the upper floor and a lounge in the basement. The small garden is accompanied by a large rooftop terrace, unfortunately without greenery.

Despite the architects’ concerns, the result can be considered a success, as we have received principally positive feedback: many people like the house. The greatest achievement is what seemed to be a mere dream for long: the removal of car traffic from the street between the university’s new and hundred-year-old buildings. Instead, a well-designed pedestrian zone has been constructed, with decorative pavement, a green strip and lighting. The statue of the person one of the faculties derives its name from has also been erected under the arcade. It is rare in Hungary for an urban public space to be at once the central forum of a campus!

Soon after the handover, the dormitory was also completed by rebuilding the former kitchen/canteen, making the campus almost complete, with new and old buildings, while new shops and cafés opened in the street.

This urban renewal process can be a good example of how refreshing the blood flow of the surrounding neighbourhood by the purposeful development of a public institution can positively influence the life of residents living in a precarious situation. 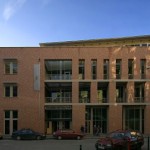 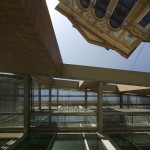 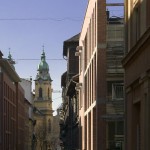