At the same time as they were building their church and monastery, the monks who settled on the Szent (Holy) Hill of Pannonia in 996 set to work to revive the viniculture tradition established by the Romans.

By the 13th century, there were twenty important vineyards in the region, where wine growing had become the chief source of economy. For centuries, wine was part and parcel of the daily life of the monastery. The nationalizations that followed the Second World War destroyed this thousand-year-old, highly successful tradition. The political transition established the possibility of starting anew the abbey’s winery. Work began with creation of a grape planting programme, and continued with the construction of a new cellar and wine house.

With a floor area of almost 2000 square metres, the new structures were built at the foot of the monastery, on the south-eastern slope of Szent Márton Hill, in an area that is part of the Pannonhalma World Heritage site. The articulation of the building, its architectural presence in the land, the materials used (reinforced concrete, steel, stone, wood), as well as its interior, represent not only the function of the complex, but its sacral context as well. The cellar technology relies on a broad spectrum of instruments with a potential for flexible use. The main parts of the winery are the four-storey processing facility (press house), itself an explicit statement in the land; the cellar, which houses the fermentation room with the stainless steel tanks, whose front is built like a retaining wall, the various passages that hold the wooden casks and run into the interior of the hill, as well as the bottler; and a structure that provides vertical access between the other two (the well). 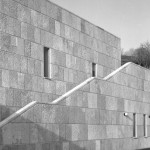 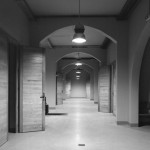 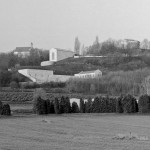