When Pécs was designated one of the European Capitals of Culture for 2010, a process began to determine the future of chosen public spaces in the city: exemplary and unprecedented in Hungary, it employed a series of competitions, one based on the other, with the participation of the public and architects. A complex of spaces were to be designed for the city centre (Széchenyi Square and its environs) that could accommodate the widely varied forms of urban life, offered places individuals, locals and visitors alike, could love and relate to, and functioned as an agora and forum that, once opened by the European Capital of Culture event series, could for decades serve as the main scene of public life in the city.
The new city centre realizes the concept of a liveable succession of spaces that is fully accessible on foot: most of the area is now closed off for traffic, creating a pedestrian connection between the formerly isolated parts of the city centre. 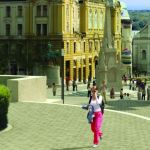 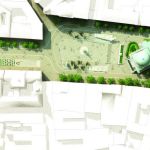