In 1896 Louis Sullivan, an architect of Chicago, formulated his aesthetic credo with regard to office buildings, which would later become the fundamental manifesto of modern architecture:

“It is the pervading law

of all things organic and inorganic,

of all things physical and metaphysical,

of all true manifestations of the head,

of the heart, of the soul,

that the life is recognizable in its expression,

that form ever follows function. This is the law.”

Natural science continuously endeavours to rationalize nature, to offer an explanation to all things organic. It is related to architecture inasmuch as it also balances on the narrow line between rational and spiritual, and aspires to penetrate areas that cannot be defined by rational laws.

Throughout this dialogue of innovation and architecture in terms of the Richter Research Centre, our goal was to construct a central space capable of having also an imperceptible effect on the ongoing research process. 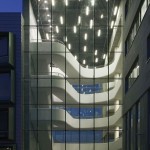