Building Q, the second building of BME’s Lágymányos campus is located next to the older building designed by Finta Studio. It houses two faculties of BME, Electrical Engineering and Information Technology, as well as the Faculty of Economics and Social Sciences.
The basic principle behind designing Building Q was to ensure the preservation of the radial-circular principle by following the spirit and scale of the existing buildings. The onset of the roads leading into the focal point of the area is a possible lookout point marking the pedestrian axis devised for the EXPO and providing a view on the Danube between ELTE’s blocks.

The building’s floor plan
Two wings incorporate the smaller spaces which include the small lecture rooms, departments, traffic nodes, bathrooms and building service shafts. The two wings are separated by a distance of 21-23 metres, with the ground floor lobby and two lecture halls of 300 and 500 seats on the first floor situated in between. The ground floor provides full visual access between the Ring Road of Hungarian Scientists and the Danube. This duality is also apparent in the structural design of the brick-covered sturdy mass of the two extreme blocks on the one hand and the central block covered in convex metal sheets on the other. 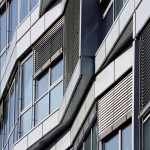 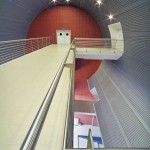 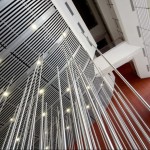