We sought natural analogies for the conceptual field of the building. We ended up with the concept of unstable rock masses shifted from their centre of gravity by earthquakes as our means of expression, referring to the cataclysm stirring up the history of humanity: the Holocaust.
In the power play of the sliced, faulted blocks pressed tight against each other, horizontal is not horizontal, vertical is not vertical, perhaps even gravity is suspended.
Architectural devices convey that here everything was created in a space outside normality, just as the Holocaust is hard to interpret with the rationality of history.
Therefore, as a principal idea, I imagined representing the earthquake as a paraphrase of the Holocaust.
The glass hall leading downstairs to the permanent exhibition is supported by tilted columns. The natural antitype originates in Tuscany, where a row of pine trees have taken this form as a result of continuous windstorms from the sea. This was intended to visualize the persistent struggle of the Jewry and every innocent deported person amongst captivity, scapegoating and genocide.
Within the tectonically structured separating walls, there is a memorial arcade listing the names of the 600 000 victims. A terrible burden. From the outside, this takes the form of a massive stone wall, often criticized by the press. I myself am not in favour of walls with no purpose, but the staggering list of names engraved in 8mm letters requires such vast surface. 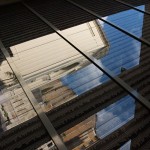 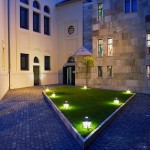 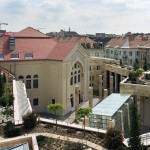