Our entry for the restoration design competition was in favour of something new—which was an organic continuation of what was already there. By keeping the complete street wing of the building, we retained what was the most important architecturally and emotionally. The new wings, in turn, were realized in the same building situation, and are oriented appropriately. The new development does not close the schoolyard towards north, but lets the side of the hill “step in.”
The gymnasium is embraced by the yard wings and we could consequently leave the large bank of earth behind the old school building undisturbed. Also, the section we built on the street front of the neighbouring empty plot is only one room deep, so as to allow the green space and the garden built over many years to remain.
The school can be accessed from Keleti Károly Street. The old gymnasium has been converted into a lobby, and leads into the atrium-like section of the entrance hall, which runs along the entire height of the building and provides an overall view of the system of spaces and passageways in the school.
The bricks of the old wing, which was pulled down, were utilized as external cladding. This is not only a cost-effective solution, but provides a meaningful spiritual link between old and new, as it suggests continuity. 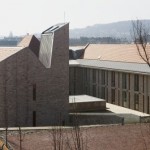 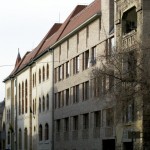 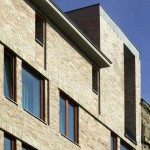