“An artist – either as creator, or educator – can only be equal to his task if his mind and emotions span the complete perspective of his time, the heritage of the past, the challenges of the present, and the promise of the future.” (György Kepes)
It was in this spirit that Spetz House in the centre of Eger was rejuvenated. A building with a chequered past, the 19th-century house has been home to a pharmacy, a sugar factory, a theatre, a casino, labour union headquarters, and a youth centre. The glass roof installed over the courtyard during its first reconstruction was a fine example of monument protection in the 1980s (designer: Rudolf Janesch).
Its second rebirth was inspired by the desire to find a worthy home for the Kepes Collection of Eger. György Kepes’s constructivist visual art and avant-garde photography required a larger space and a more generous architecture than was formerly available.
These requirements happily coincided with the architectural possibilities and the newly revealed hidden treasures of the building. The new function, that of the art gallery, allowed us to re-establish the original system of spaces, and while the historic building could be restored in an authentic fashion, the architecture of the new exhibition spaces could be distinctive enough.
The restored main gate, the see-through, glass sliding door, the newly exposed columns and arches of the doorway, the reconstructed main stairs, all make entry a moment of celebration. The transparency of the courtyard is enhanced by the new glass railings of the open corridors, and space relations are enriched by two suspended walkways. Here the minimalist reserve of the interior design can be considered a 21st-century reflection on the Classicist architecture.
Along with the interior, the exterior of the building was also renewed. The new look of the house is defined by the stone mouldings and the stucco panels, re-coloured grey. 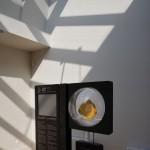 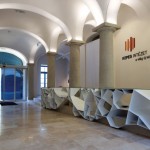 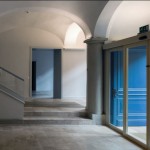