IS INFINITY THE UNIVERSE OR NOTHINGNESS?

What makes the difference between the two is essentially faith. The journey to “nothingness” may be a progression of life, in which the change of dimension which the tomb represents may only introduce a new phase.
The glass crystal touches the ground like a ray of light from heaven; its fine shimmer, and the cross brought to life by the sunshine, radiate like our fragile values: faith, integrity and intellect.
The composition relies on the properties of the space, the characteristics of the time of the day and the weather, and an emphatic optical illusion. As one approaches the tomb, the first to stand out is the monolithic, large tombstone, to be followed by the asymmetrical glass pyramid behind it. The cross of the tomb becomes visible only at a certain position of the sun, and is the most beautiful at the anniversaries of the funeral. 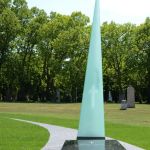 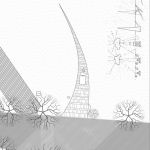