Reconstruction of the Basilica of the Pannonhalma Archabbey

The final stage of the reconstruction of the Pannonhalma Archabbey was the renovation of the basilica. The community of monks devised the new liturgical concept after lengthy pondering. The exceptionally pure program, which intended to organically implement the fundamental principle of the Benedictine order, “ora et labora”, into the existing church space, practically predefined the major sites and character of the intervention.
The most important element of the reconstruction was the liturgical reinterpretation of the East-West axis. The gradual nature of the intervention, the ascending sequence of spatial elements, the spatial suggestion of the coming of Heaven give a new reading to the basilica, enriching the superimposed imprints of ages past with a new – mental – layer. The simplistic system of forms appears in the historical space with amplified effect. The historical background is far from just a setting, it is much rather a new partner in the discourse interpreting the Middle Ages.
The intervention was restricted to three main areas: rethinking the floor pavement, fitting the liturgical objects and furniture into the monastic vision, and giving a medieval character to the artificial lighting. The choice of materials unified the design while placing emphasis on different aspects. The onyx running along the main axis is materialized in liturgical objects (baptismal font, altar, ambo, rose window). Despite the subtlety of the intervention, the result radically differs from the previous renovation of the interior by Ferenc Storno and can be considered the contemporary derivative of the medieval church. 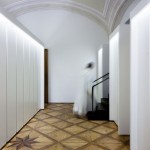 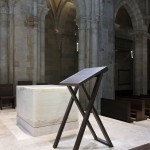 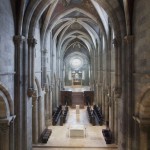