The intention behind the landscape architecture design was to renew the by then outdated urban space structure of the area, and to connect the two sections of Uránbányász Square ( which had been bisected by roads), both with each other and with Szilárd Leó Park, by means of squares, roads and walkways, most of which were to serve the passage and staying of pedestrians.
Once a park has been built, maintenance and financing become key issues. This was why it was so important we could convince the municipality about the benefits of a “Park Pavilion,” to be erected next to the playground, which can not only offer services that suit the place (café, public toilet, storage facility), but also turns the park into a sustainable economic unit, in that the rental fee of the structure (i.e. private capital) can be used to maintain the park. The pavilion also generates pedestrian traffic, which can be very effective in preventing of vandalism.
It was a great experience to find the ground plan that defines the look of the park: it is functional and adaptive (freely incorporates the valuable trees and bushes already there), while it lends an original character to the park, thanks to the graphic fineness of the routes of the paths. 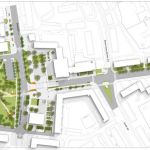 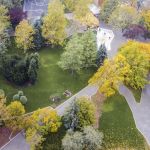