The Szentágothai János Research Centre of the University of Pécs was built with a grant from the European Union. The complex comprises three, almost identical volumes. The first and second “cubes” are connected by a communal space that also includes a lecture hall, while the second and third by that indispensable prop of university campuses, the “bridge of sighs.” Wedged in between the three rigorous cubic masses is a pebble-shaped lecture hall, which seats 300. The snow-white aluminium cladding of the three volumes is not only pleasing aesthetically, but creates a double facade, which both hides the pipework of the mechanical system, and provides a scalable shading solution. The “pebble” of the lecture hall has a cladding with the colour and shine of Zsolnay porcelain, and became a symbol of the research centre during planning.

Equal in mass, the three sections have three different sources of energy; all the energy consumed is monitored, and the data are used to optimize the functioning of the entire building. Building C, which houses the heavy laboratories, uses the district heating service of Pécs. Building B in the centre, which houses the block of computerized laboratories, receives energy from more than 100 heat collectors driven into the ground to a depth of 100 m. Building A draws energy from the sun collector wall on its southern facade, as well as the “waste energy” of the other two sections, and accordingly gives home to an energy lab that serves architectural research. 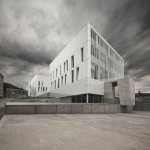 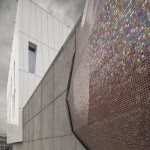