Our life is an accumulation of destiny fragments swept forward by an overwhelming current, like stars floating in the Milky Way. Likewise, drifting thought fragments accompanied the designing of the funeral chapel of Ebes.

It is based on the exposed condition of being stretched, crucified. It is the sacrifice offered to the heavens at the altar, or the coffin lifted on shoulders. It is what is depicted in Rembrandt’s paintings Slaughtered Ox (1655) and Descent from the Cross (1634), the two inspirations for the governing form. To experience the line between existence and non-existence, one has to ascend. We ascend a small hill, like our ancestors when they built kurgans, burial mounds on the land near Ebes. A vast number of different columns support the roof. No wall, no limit.

Less and less light seeps through from the side. What remains is the ray of light above the catafalque. No one can obscure that. That is eternal.

Beyond the catafalque, a living tree can be seen. Our ancestors planted a small tree at the head of the grave mound in our ancient Hungarian graveyards.

This funeral chapel wishes to be about continuity instead of annihilation. In Gabriel García Márquez’ words: “it is life, not death, that has no limits.” (Love in the Time of Cholera) 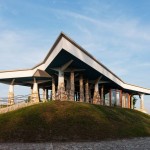 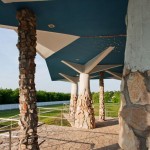 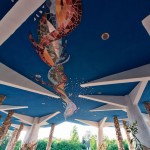