“And no one puts new wine into old wineskins. If he does, the wine will burst the skins—and the wine is destroyed, and so are the skins. But new wine is for fresh wineskins.” Mark 2:22

Built in the 1970s, Újpalota’s housing estate is the fiasco of an experiment in urban development and sociology that now can be called historic. Moving tens of thousands of people to a new place will not create a new settlement. This will be the case especially when institutions that organize and reinforce the community are missing or are intentionally left out of the plan.

The new parish church is just such an institution. To support the spiritual regeneration of those who live in the housing estate, the building needed to express both the strength of a thousand-year-old church, and its openness to continuous renewal.

The church has a traditional floor plan, with all the pews facing the main altar. Conforming to the traditions of Catholic churches, the windows are placed high, providing a view mostly of the surrounding trees and the sky, with the exception of the street facade, where the thin strips of glass allow passers-by to look inside, and see as far as the main altar above the massive limestone block of the baptismal font. In addition to religious life, the spaces of the new building also serve such functions as concerts, exhibitions and lectures. We would like the garden of the church, sunken, protected, and Mediterranean in mood, to be filled with life throughout the week. 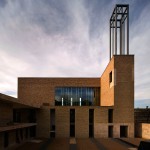 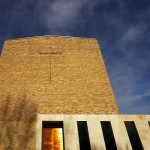 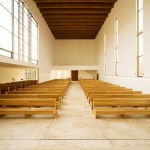