The new facilities of the Royal Tokaji Winery of Mád, which house modern, reductive technology, were built on premises already in use in the centre of Mád. The new installation was particularly meant to harmonize with the context provided by the texture of the village, which is marked by thin, long plots, as well as with the existing order of scale. Instead of a single block, which would have been beneficial to the technology, smaller masses were arranged like pavilions: a choice motivated by the desire to fit in the context, but also advantageous with regard to the spatial organization of the construction, which could be carried out in multiple phases. This both allowed the plant to go on functioning during construction, and facilitated the continuous replacement of existing technology.

Each building is a collection of architectural “archetypes” drawn from traditional cellar houses, while their axes are at a right angle. Their structure comprises monolithic reinforced (fair-faced) concrete, and shell-roofs. All the buildings are covered with sawn slabs of rhyolitic tuff from the local mine, made airier with dividing lines of sand-lime brick.

There are two types of roofs: where the complete airspace is conditioned (bottler, barrel fermentation room), a green roof of almost 1 m thickness was installed, whereas spaces where only the tanks are cooled (tank fermentation room) are covered with double-shell vented roofs. To maximize heating and cooling efficiency, the outer walls and the ceilings are vigorously insulated, almost to the level of passive houses. 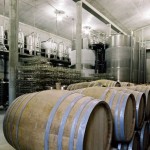