I consider the Szent Donát Winery on Szita Hill, Csopak the synthesis of my activity at the Balaton Highlands. With my small drafts I would like to demonstrate the joyous and playful enterprise of developing the large winery-wine shop-restaurant-pension complex in three stages from an earth cellar.

Whenever the client had the means to buy some more land, the authorities permitted the further expansion of the building. The end result is the unusually inspired combination of a wine press house of multiple floors typical of the Balaton Highlands and a dwelling house with a porch.

The cellar, built from old dismantled bricks, divided into two naves by a row of columns, with a vaulted ceiling made up of domes between transverse arches, is the masterpiece of Ferenc Heimann “vault wizard”.

In terms of formal construction and material, the large ground floor space and the porch are distinctly traditional, while hinting at their contemporariness with small gestures. The technological cellar, the wine storage space and the kitchen were later additions and are situated underground. The summer catering area (not MÉRMŰ’s design) is of more modern tone, but fortunately it is distinctly separate from the original building.

The photographs are courtesy of MÉRMŰ Studio. 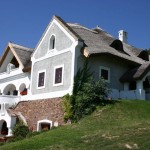 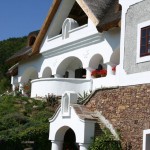