New Generation Centre, conversion and extension of the main building

The main building of the New Generation Centre in Zánka was a modernist building constructed in the early 1970s (Imre Kiss, ÁÉTI). The new requirements called for the introduction of a new formal idiom, which in its details retains the style of the original building, but also humanizes it as its organically related continuation. Rather than turning its back on the given conditions, it understands and maintains them, deriving the architectural logic of the conversion from the existing forms, creating a reinterpreted, harmonic unity between the merits of the past and the modern, expressionist architecture.
The most conspicuous intervention was the addition of a storey to the ground floor “pie” of a building, where the large upcurved roof, which follows the appearance of modern shell structures, is suggestive of the waves of Balaton, and ensures a unity for the building. This dynamism is a completely new component, which is reminiscent of the free, energetic shaping of reinforced concrete volumes by Lautner and Niemeyer. The regularly alternating upright and downturned Y-shaped supports create a homogeneous facade texture with the green, yellow and blue glass fields that appear now and then in the plane of the stepped back curtain wall. Thus duplicated, the facade fills the reconsidered horizontal volume of the building with life and energy. 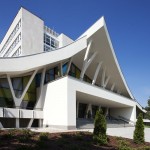 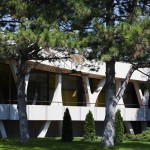 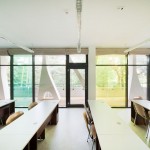